One of the major social justice novels of the Depression era, The Grapes of Wrath, just turned 75.

John Steinbeck’s 1939 Dust Bowl epic about the Joad family was based on articles he wrote for the San Francisco News and the Nation on the plight of agricultural workers migrating from drought-ridden Oklahoma to California. It’s a crude monument to the New Deal, a saga heavy with Okie-approximating dialect that is interrupted by “interchapters,” or mini-editorials, on sharecropping, mechanization, and the rapacity of “the great owners” in whose hands massive wealth is concentrated. The landowners’ neglect of the migrants will bring “an upheaval” that takes their land away, unless the government steps in with ameliorating programs.

John Ford’s 1940 Hollywood adaptation, which naturally had to pare away all the sociopolitical apparatus, is widely acknowledged to be superior to the original.

Steinbeck’s novel, and the journalism that preceded it, relied on research reports from a colorful manager of a migrant camp in California, a Farm Security Administration official named Tom Collins. That was the unromantic truth discovered by Jackson J. Benson (writing on Steinbeck in the April 1976 issue of the Journal of Modern Literature). “Contrary to the story which has developed into a myth about the writing of The Grapes of Wrath,” wrote Benson, “Steinbeck never did travel to Oklahoma and then make a trip back to California with a migrant family.” This idea, he said, “came from two sources: first, the confusion of two different trips, and second, a bit of conscious deception by Steinbeck.”

Murray Kempton, in his classic study of communism and culture in the 1930s, mentioned Steinbeck as a practitioner of the “plebian fiction” of that day. But he highlighted the Communist Party’s dissatisfaction with Steinbeck’s work: In Dubious Battle (1936), about a fruit-pickers’ strike, was condemned by CP literati for not adhering to the Party’s formula of the proletarian novel. (The biblical references and Christ imagery in The Grapes of Wrath must have displeased them as well.)

Steinbeck did, though, take the Depression-era affect with him through life, always presenting himself as a writer in close contact with the downtrodden. It was a pose he labored to maintain in Travels with Charley: In Search of America. “Once a bum always a bum,” wrote Steinbeck in that much beloved 1962 travelogue, in which the celebrity author, then 58, supposedly plumbed the depths of the American soul.

He wrote the book after driving from New York to California and back in a camper with a poodle named Charley. The account was largely fictional, the reporter Bill Steigerwald revealed a couple of years ago. Encounters with fascinating people along the way were invented by Steinbeck, and his publisher expunged passages that would have made clear that this was no solitary immersion in America’s gritty reality but a scenic vacation with his third wife. 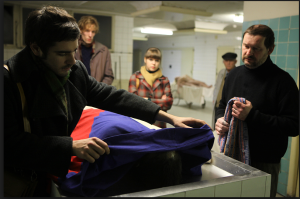 In 1968, over 150,000 Red Army troops entered Czechoslovakia to reverse the political liberalization known as the Prague Spring. Agnieszka Holland’s new movie Burning Bush, about the Soviet invasion and its aftermath, aired originally on HBO in Europe.

The work of Holland, a Pole educated in Prague, is familiar to American audiences. Her long list of directorial credits includes Europa, Europa (1990), The Secret Garden (1993), and Washington Square (1997), as well as episodes of television’s The Wire and Treme.

Her frame for depicting the events of 45 years ago is the libel suit against the Czechoslovak government that was launched by courageous relatives of the young dissident Jan Palach. The government sought to defame Palach, one of several East bloc activists to commit suicide by self-immolation to protest the Soviet domination of their countries.

Flagg Taylor has written about the film here and here. Also a free preview is available. (International trailer here.)