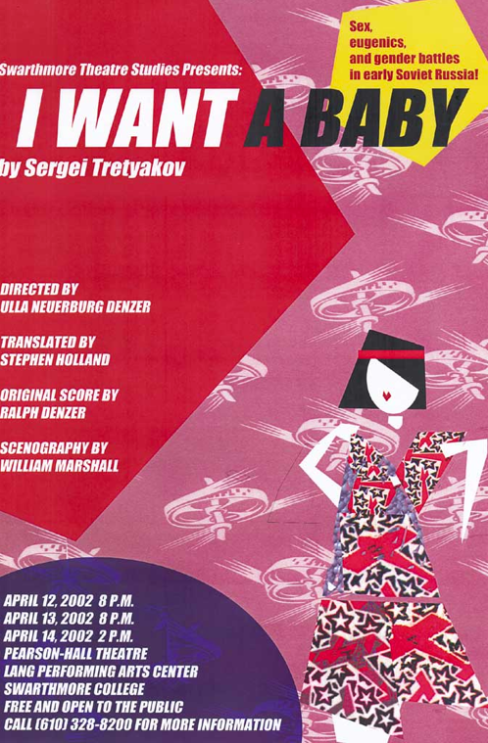 Sex, eugenics, and gender battles in early Soviet Russia! That’s the cheery blurb on the handbill of Swarthmore College’s 2002 production of I Want a Baby by Sergei Tretyakov.

Tretyakov (1892-1937) wrote the play in 1926. It’s about Milda, a young Latvian woman of humble origins “who is helping to build a new, communist way of life in the Soviet Union,” according to the scholar Eric Naiman. “Her virtually non-existent libido notwithstanding, Milda wants to contribute a healthy child to Soviet society, so she sets about hunting for a short-term sexual partner with impeccable class and biological credentials.”

It did, as was the playwright’s intention. Tretyakov wrote that I Want a Baby was “meant to be a discussion piece.” There were “didactic-propagandistic elements” in it, but audience members were supposed to draw their own conclusions. He did not like theatrical works, he said, that “conclude with an approved maxim.”

Introducing the 1995 translation of I Want a Baby, Robert Leach wrote that Tretyakov’s aim was “not to undermine the regime, which he wholeheartedly supported.” Rather, he sought “to open unmentionable topics for discussion. He believed that Communism required an unblinking recognition of the truth and an absolutely open and democratic debate about the truth.”

Sergei Tretyakov was arrested in Moscow by the Soviet secret police in 1937 on a charge of spying. Accounts differ as to whether he was executed or committed suicide after being tortured. His friend Bertolt Brecht protested Tretyakov’s innocence in a poem of commemoration entitled “Are the People Infallible?” This tribute to his friend was, however, written “for an audience consisting of himself alone,” said Robert Conquest. Not only that, the poem initially had Tretyakov’s name in its first line but Brecht later crossed it out. (See “The Fourth Door: Difficulties with the Truth in the Svendborg Poems,” essay by Joyce Crick in Brecht’s Poetry of Political Exile.)