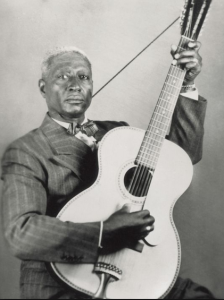 (1888-1949) on the Smithsonian Channel. Legend of Lead Belly follows the career of the 12-string guitar wonder who absorbed the music of rural and small-town America in his travels through his native Louisiana and Texas.

The writer and arranger who gave us Goodnight Irene, Midnight Special, Rock Island Line, and In Them Old Cotton Fields Back Home was famously “discovered” while serving time in Alabama by the musicologist John Lomax and his son, Alan. They brought Lead Belly to New York.

Commercial success was elusive, however. He failed to connect with black audiences in Harlem. The record producer Joe Boyd was interviewed in the program. According to Boyd:

Lead Belly, when he emerged from prison in the Thirties, was already an anachronism in terms of African American music. And so the only real audience for Lead Belly was white audiences.

Of a certain kind, that is. Lead Belly was taken up by “some of the most prolific musical radicals of the day.” He “found an audience with the leftist community,” in the delicate phrasing of Kevin Strait of the Smithsonian.

This sojourn among the Red folkies was faute de mieux. It included hootenannies in the Ledbetter apartment in midtown Manhattan, where the host always played and sang in a suit, bow tie, and carefully placed handkerchief—the crisp attire of the self-made man. Meanwhile Alan Lomax, Woody Guthrie, Pete Seeger, and the rest would show up in work shirts and jeans, which they wore because they were “trying to represent the common man,” says the musician’s grand nephew, Alvin Singh.

One of the players at the gatherings, Tom Paley, says Lead Belly was friendly in “a slightly formal way.” Eventually the dapper host, prompted by his long-suffering wife and her sister, would hint to his guests that it was time to wrap it up.

First Things has reprinted what your editor wrote a while back on Pete Seeger, who died Monday at the age of 94.

“Matron Felled by Cane in ‘Old Plantation’ Setting” ran a 1963 headline in the Baltimore Afro-American. The report was about the murder of 51-year-old Hattie Carroll at the hands of 24-year-old William Zantzinger, who struck Mrs. Carroll at a costume ball in downtown Baltimore. Zantzinger, white son of Maryland’s tobacco farming elite, drunkenly lashed out at her and another black woman on the hotel staff that night, yet he received barely any punishment for his crimes.

The song Bob Dylan wrote about the case, appearing on the album The Times They Are a-Changin’ , was released 50 years ago today. Your editor’s local radio station, WYPR, ran a commemorative piece about it.

“The Lonesome Death of Hattie Carroll” is an early Dylan song. It’s from his period experimenting with the Woody Guthrie method of editorializing musically about the news. Guthrie’s fellow Oklahoman transplants and fellow Red folkies, Agnes “Sis” Cunningham and Gordon Friesen, made it their business to encourage Dylan, along with Janis Ian, Phil Ochs, and other young musicians, to expose America’s ills in their music. The husband and wife team called it “social realism in topical-song writing.”

The couple were dismayed when Dylan, a role model to his peers, pivoted away from protest songs. It was a shattering development, they said in their joint memoir, Red Dust and Broadsides (1999):

“It caused scores of young song writers to abandon their original direction . . . (ballads, political commentaries, etc.) in order to try and become new Bob Dylans. They began writing involved, personal, introspective poetry and then attempting to set the result to guitar music with mouth harp interludes.”

This was no way to promote “the inherent goodness of the working class.”

Note the preceding photo. That envelope was sent to Moe Asch’s recording studio in Manhattan by Woody Guthrie. Moses “Moe” Asch (the original Mel Novikoff from Inside Llewyn Davis, see December posts) began putting Guthrie’s singing and playing on acetate master discs in 1944. The producer was “impressed with the man’s ability to make the radical past come alive,” according to Joe Klein in Woody Guthrie: A Life (1980). The Guthrie album called Struggle, featuring “some of his heavier material,” was an Asch release from 1946.

Asch assigned Guthrie a project that was to have been the pièce de résistance: a set of original songs about Sacco and Vanzetti, who had been celebrated as martyrs by the Communist Party for decades. The songs didn’t turn out well. Guthrie’s work “was becoming rather ponderous and self-righteous,” writes Klein.

The Folk Scare. There’s not much that’s political about Inside Llewyn Davis, the Coen Brothers’ new movie about a folksinger in the early 1960s. A funny scene down at the Merchant Marine hiring hall has a stray joke about Schactmanites (a fractious faction of Marxists who rejected Stalin’s rule), but that’s about it.

The folksinger Llewyn Davis displays zero interest in being recruited into that obscure sect. For Dave Van Ronk, upon whom Davis is loosely based, politics were more interesting than that (if not quite as interesting as music). As the unofficial “mayor of MacDougal Street”—the title of his 2005 memoir, from which the Coens borrowed—he was an astute observer of what he playfully called “the great American folk scare.” 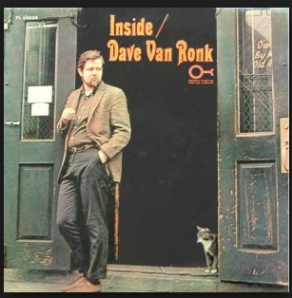 Van Ronk (1936-2002), a rescuer of old jazz, blues, and folk tunes, performed in Greenwich Village starting in 1957, and was a major tastemaker in a local music scene that caught on with college students across the country. He helped the aspiring musicians who flocked to his native New York, including a skinny, 19-year-old Minnesotan named Robert Zimmerman, who showed up in 1961.

By calling it “the great American folk scare,” Van Ronk intimates that musical bohemians and political radicals mixed in his world. Woody Guthrie and other Communist Party members who had launched a folk revival decades earlier were the elder statesmen when people like Van Ronk, and later Zimmerman (a.k.a. Bob Dylan), came along. The “message” songs sung by the CPers tried to promote the Revolution.

This was odd and amusing to the working-class Irish (with an admixture of Dutch) kid from the outer boroughs who, circa 1950, found music in Washington Square Park. On Sundays, the CPers would be out in force, sitting on the grass with “five-string banjos and nylon-strong guitars in hand, singing what they called ‘people’s songs.’ ” Adds Van Ronk:

“I remember once coming across a covey of them sitting cross-legged around a bespectacled banjoist who struck a dramatic chord and earnestly explained, ‘This is a song the workers sing when they’re oppressed.’ ”

His is not a systematic account, but the reader gathers that he floated through “a loose-knit anarchist group” or two, and the Young People’s Socialist League, before his participation apparently petered out. He describes public demonstrations against the Reds. The American Legion would organize people to picket outside the cabaret venues and concerts of performers identified as communists. These were dark times, says Van Ronk. Because communists were persecuted, he writes,

“I almost sympathized with them: I mean here you are, you’ve spent thirty or forty years of your life peddling poison that you thought was candy—think what that can do to somebody’s head. On the other hand, we could see what was happening in Eastern Europe, and many of us had also had our run-ins with authoritarian, Stalinist die-hards . . .  we knew them for the assholes they were.”

Speaking for himself and others—“we of the non-Communist left, whether we were revolutionary socialists or anarchists or whatever the hell we were calling ourselves that week”—he says that the anticommunists, “however loathsome and psychotic” they were, had “gotten one thing right: the CP was the American arm of Soviet foreign policy, no more, no less. They were stolid organization men.” So “even though we had a certain amount of admiration for the singers who stood up to the Red hunters, when you got right down to it we wanted very little to do with them.”

The film is not very Van Ronk, and this is true in ways beyond the political. He was charming, rugged, a font of musicological chatter. Joel and Ethan Coen have other fish to fry with their irascible yet soulful Welsh-Italian loner, Llewyn Davis. He is played by Oscar Isaac, who sings wonderfully—better than Van Ronk did. Van Ronk was the better guitarist. For interesting perspectives on the movie, see Sean Wilentz here and John Podhoretz here. 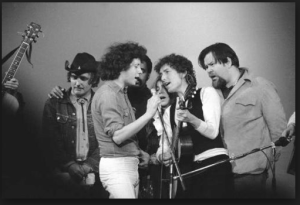